For 6 months now a group of us have been exploring Tantra, meeting, practicing and having ceremonies at my house – we have been calling it the “The Ashram on the Hill”. Basically we opened up 19 Danks court to a series of dialogues, talks, meditations, and practices around Tantra. Its been a great vehicle for people to come and get a taste of this way, connect with others of a similar inclination and engage in a somewhat regular practice.

Given the investigation in the Agile Awakening post the title “Ashram” has become an uncomfortable fit. I did consider an attempt to update the concept of what an Ashram is, essaying an ‘Ashram 2.0’ perhaps but as a thousand year old term it has a lot of associations and inertia and no longer felt right.

To the Participants of the Ashram

A huge thank you to those who have attended the Sunday ceremonies at the Ashram.  Your presence, challenges, enquiries and feedback were definitely a formative part of this metamorphosis.

I have enjoyed immensely the space and sharing that has happened here.  Although the format and name are changing and there is more clarity on direction the space and community remains.

As the Ashram exits stage left enter the Dharma Lab.

Lab is short for Laboratory which comes from medieval Latin laboratorium, from Latin laborare ‘to labour’ or ‘to work’. It is a place where one does the work. The first laboratories were where Alchemists practiced their art. Alchemy is one of the Hermetic disciplines and an integral part of the western spiritual tradition.  The purpose of Alchemy is the transmutation of energies and transmutation of self.

In modern usage its appealing that those in theatre also often use the term “Lab”.

The term ‘laboratory’ was officially added to the name of the Theatre of 13 Rows on 1 March 1962, shortly after the premiere of Kordian and during work on Akropolis. This addition was connected to the pivotal change in the group’s working practice that accompanied the start of methodical research on the art of acting. This signalled a gradual departure from work whose chief objective had been to satisfy the demands and needs connected with further performances in favour of moving towards a process of discovery carried out using theatrical methods that was as much concerned with the art of acting as with the possibilities of the organic development of the human being.

In earliest texts and ancient myths of Hinduism, dharma meant cosmic law.  Dharma root is “dhri”, which means ‘to support, hold, or bear’. It is the thing that regulates the course of change by not participating in change, but that principle which remains constant.  Truth is another word for it.

“Our basic nature is in no way different from that of a buddha. It’s like pure space, which, whether it is obscured by clouds or is a cloudless and clear sky, remains the same in its basic, essential nature. But if you pretend that your nature is already enlightened and don’t progress along the path of removing the obscurations, then your enlightened nature doesn’t become realized…Vajrayana tells us that the nature of mind of all beings is covered by two obscurations. One is called ‘the emotional obscuration’ — desire, anger, and dullness. The second, the ‘cognitive obscuration’, is the subtle holding onto subject, object and and interaction, in which awareness strays into dualistic clinging. These two types of obscuration need to be dissolved and purified. This is accomplished by gathering the two accumulations — the accumulation of merit and the accumulation of wisdom, the training in original wakefulness. By gathering the two accumulations we unfold the two types of supreme knowledge — the knowledge that perceives whatever possibly exists and the knowledge that perceives the nature as it is.”

Put the roots of the 2 words together and you have at its root “a place to hold & bear the work”. The Dharma Lab is a place to support us in our work, in our practice. It is a container to hold us while we emerge as our very selves.

Here we engage in the discipline of investigating the nature of things, examining and experimenting with methods (tantras) to remove obscurations of the real.

Given this move to a non-hierarchical, non-dogmatic structure what is the approach at the Dharma Lab?

The networked world approach is based on a very different idea. It does not begin with utopian goals or resources captured through specific promises or threats. Instead it begins with open-ended, pragmatic tinkering that thrives on the unexpected. The process is not even recognizable as a problem-solving mechanism at first glance:

Immersion in relevant streams of ideas, people and free capabilities, Experimentation to uncover new possibilities through trial and error, Leverage to double down on whatever works unexpectedly well

The protocols are still emerging but some things are obvious:

– We are informed by an Agile Awakening approach.
– Meditations, Tantras, Practices, Texts, Video, Audio, Programs to be released under a Creative Commons Attribution Share-Alike License (CC-BY-SA)
– If some of the community wish to go their own way they can fork the whole lab
– I (Sy Tzu) will be the initial Project Co-ordinator 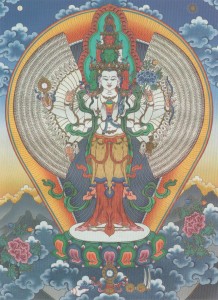 Avalokiteśvara is a bodhisattva who embodies the compassion of all Buddhas. This bodhisattva is variably depicted and described and is portrayed in different cultures as either female or male.

One prominent Buddhist story tells of Avalokiteśvara vowing never to rest until he had freed all sentient beings from saṃsāra. Despite strenuous effort, he realizes that still many unhappy beings were yet to be saved. After struggling to comprehend the needs of so many, his head splits into eleven pieces. Amitābha, seeing his plight, gives him eleven heads with which to hear the cries of the suffering. Upon hearing these cries and comprehending them, Avalokiteśvara attempts to reach out to all those who needed aid, but found that his two arms shattered into pieces. Once more, Amitābha comes to his aid and invests him with a thousand arms with which to aid the suffering multitudes.

What better representation of the emergence of the collective messiah than a thousand arms operating as one being.